Movavi photo editor is a premium photo editing software program that works on both Windows and Mac, and is said to be one of the best photo editor systems ever. With Movavi on your computer, you can remove unwanted objects from your photos which is the key feature of this photo editing app. In this post I will be reviewing Movavi Photo Editor.

One of the best ways of remembering an image on holiday is photographing, but photos can also be used for everyday work, and a good editor might be needed. Movavi photo suite offers users a range of picture editing options. It offers the feature to adjust brightness and contrast with the Magic Enhance System, and it’s also a great feature if there’s something in the foreground of your picture you wish to highlight.

Like most photo editor, Movavi comes with crop, flip and rotate to bring out both the best features of each picture whilst also removing the excess bits that aren’t wanted.

The Process of editing.

1. Open the image. Just find an image you want to edit.

2. Select a specific area you think can use a bit of adjustment. This area should contain an unwanted element. For example, if you have a picture of an island whilst you’re on a cruise, and someone carelessly puts a hand on the rail you can use Movavi to simply cut out the hand. The end result should show a picture with just an island. 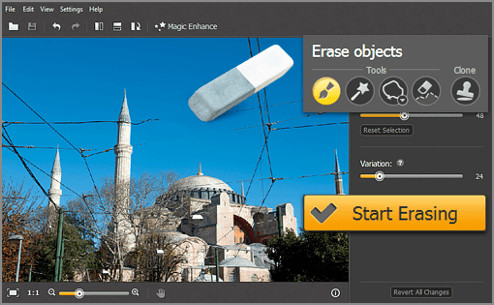 3. Save the picture in the format you’re most comfortable using like BMP, JPEG-LS, JPEG, WebP though there are others, these are just examples.

Movavi has many benefits. It’s well laid out an organized and easy to understand. For photographers who use digital technology to edit all of their work, and use software like Xara’s Photodesigner 7 and decide that Movavi’s feature is simpler to use with its ability to remove unwanted objects whilst coming with the standard set of tools-brightness, sharpness, contrast.

Some Amazon reviews refer to this program as a small app that’s easy to use, but brings great results. Another review on Amazon says it’s better than Adobe Photoshop Lightroom for deleting unwanted items and elements from the photos.

Another difference between Movavi and other softwares of its type is Movavi doesn’t seem to pretend to have more features than are necessary, making them unnecessary that doesn’t do anything but make the program complicated. That’s the problem with many programs on the internet.

Some people might prefer programs that offer more in the way of editing features. With Movavi you can only edit one picture at a time, but it makes up for this shortcoming by its ease of use. Some users make notes of what can make Movavi more versatile, and make notes of what other features it can use.

Other people might prefer using free photo editors on the internet than actually pay for Movavi, but that’s typical of many internet systems, and many people say Movavi is only suitable for beginners because of its size and the lack of additional features. Sometimes a customer might even get Movavi and not get the program they wanted because it doesn’t do what they want. If you want to consider other softwares other than Movavi, check out Flakes Fusion where they review many different software products.

Beyond that, Movavi is easy to use and it does what it says which matters most. You can buy the software from their official website for $19.95.